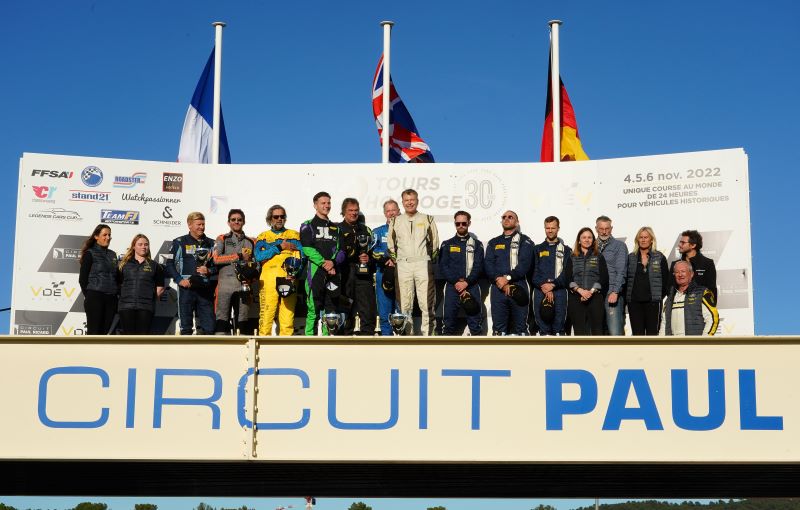 Revived last year by the sheer determination of their creator, Eric Van de Vyver, who has since handed over the reins to his daughter Laure, the 2 Tours d’Horloge, the only endurance event in the world reserved for historic racing cars, celebrated their 30th anniversary.

For this anniversary edition, 37 Sports Prototypes and GT/Touring cars and their driver lineups representing 12 nationalities set off in front of a big crowd after the traditional herringbone grid lineup and the starting ceremony celebrated with great fanfare!

After several leadership changes during the opening laps, the ex-Bobby Rahal Chevron hounoured its former renowned driver by installing itself in the lead driven by Josserand de Murard/Philippe Marie/Julien Grenet for the first three hours of the race. In hot pursuit was the Porsche 930 Turbo of Pascal Duhamel/Sébastien Crubile/Romain Rocher, which started on pole, and the Tiga SC 83 of the British Hyett crew.

A little later on, the Porsche 930 Turbo took the lead provisionally before the Chevron B16 got back in front. Behind, the race had already lost some of the favourites like the BMW 635 CSI in the hands of Matthieu and Jean-Baptiste Chateaux/Alain Girardet/Patrick Delannoy, quickest in the touring category the previous day, which suffered gearbox issues forcing the team to change it dropping them to the back of the field.

An engine problem also scuppered any chances of a good result for the Italian crew of Valerio Leone/Davide Leone/Marco Coppini/Roberto Tonetti in the Lola T598 entered by the Racing & Classic team. In contrast, others made a superb comeback up through the field like the Group A BMW 635, which took part in the Spa 24 Hours and the European Touring Car Championship driven by Thierry Boutsen, crewed in the 2 Tours d’Horloge by Armand Mille/Guillaume Mahet/Pierre-Alain and Erwin France. The German car prepared by the Equipe Europe started in 21st place on the grid following a collision during qualifying and worked its way up into the top 10 after four hours racing.

THE BRITONS COME OUT ON TOP!

Shortly before 22:00 as the seventh hour of the race approached the Chevron B16’s run in the lead was compromised by a collision on the track. Due to the time it lost stopping at its pit to readjust the parallelism, repair the bodywork and put on four new tyres, the British prototype rejoined the race in third place two laps behind the current leader the March 81 S run by the Equipe Palmyr driven by Nelson/François Belle/Augustin Sanjuan. This crew held on to first place in the race for more than two hours.

Then as the laps were reeled off with driver changes and refuelling stops during the night three teams swapped the lead beginning with Duhamel/Crubile/Rocher (Porsche 930 Turbo) and then British drivers Snowdon/Houghton/Fry/Law (Tiga SC 83). During the 14th hour the March 81 S run by the Equipe Palmyr was hit by transmission issues that caused a long pit stop lasting 25 laps dashing the team’s hopes of victory. Then it was the turn of the Porsche 930 Turbo, which topped the time sheets for over five hours, to be slowed by a broken bearing letting the Tiga SC 83 entered by the Equipe Rosbif Snowdon take over the lead which it held till the chequered flag! Thus, British drivers Chris Snowdon/David Houghton/Mike Fry/Josh Law won the race in the overall classification as well as the S2000 category.

The Porsche 930 Turbo of Pascal Duhamel/Sébastien Crubile/Romain Rocher prepared by Crubile Sport for the Pascalou Racing team came home in second place a lap behind and clinched victory in the GTS category. On the third step of the podium in the overall classification was the Porsche 964 Cup entered by the Lionspeed GP squad for Jose Garcia/Timmo Mol/Patrick Kolb/Patric Niederhauser who also finished second in GTS.

After fighting its way back up through the field from 21st place at the start of the race, the BMW 635 Gr. A (Equipe Europe) crewed by Armand Mille/Guillaume Mahe/Pierre-Alain Erwin France came home sixth overall and triumphed in the Tourisme category. The ex-Bobby Rahal Chevron run by the O-One team and driven by Josserand de Murard/Philippe Marie/Julien Grenet that led the race for a long time before being the victim of a collision, got back among the front-runners late on in the night. The car then suffered clutch problems and finally crossed the finishing line in seventh place overall winning the category reserved for SP 1s (Sports Prototypes 1). The rotary-engine Chevron B16 entered by the Atlantic Racing team for Romain Belleteste/Christophe Gadais/Daniel Roustan/Thierry de Latre du Bosqueau sealed first place in the SP2 category.

The Porsche 944 Turbo driven by Hugo Mezard/Emilien Chayia/Nicolas and Antoine Doquin clinched victory in the GT category from the Porsche 944 S2 run by the Cudini Racing Team for the crew Arnold Noret/Franck Hardonniere/Cyril Raymond joined for this occasion by Grégory Galiffi, the host of the Direct Auto programme, which will broadcast a full report dedicated to the event on the C8 channel on Saturday 12th November at 11:00.

And last but not least, the win in the Saloon Car category went to the Swiss-Belgian crew of Serge Libens/Marc and Christine de Siebenthal/Henrique Gemperle in the Team Circuit de Dakar/Mansfeld Porsche 964 RS followed by the TVR Griffith 200 in the hands of Eric Van de Vyver/Léo Mothe/Guillaume Maillard/Eric Baumard. The 30th Anniversary edition of the 2 Tours d’Horloge also provided ample proof of the fact that, despite their age, the historic racing cars entered for this race that’s unique in the world were superbly prepared for such a challenge as 29 of the 37 entries saw the chequered flag!

7 – 8 April : The 6 Hours of Paul Ricard (as part of the French Historic Grand Prix)