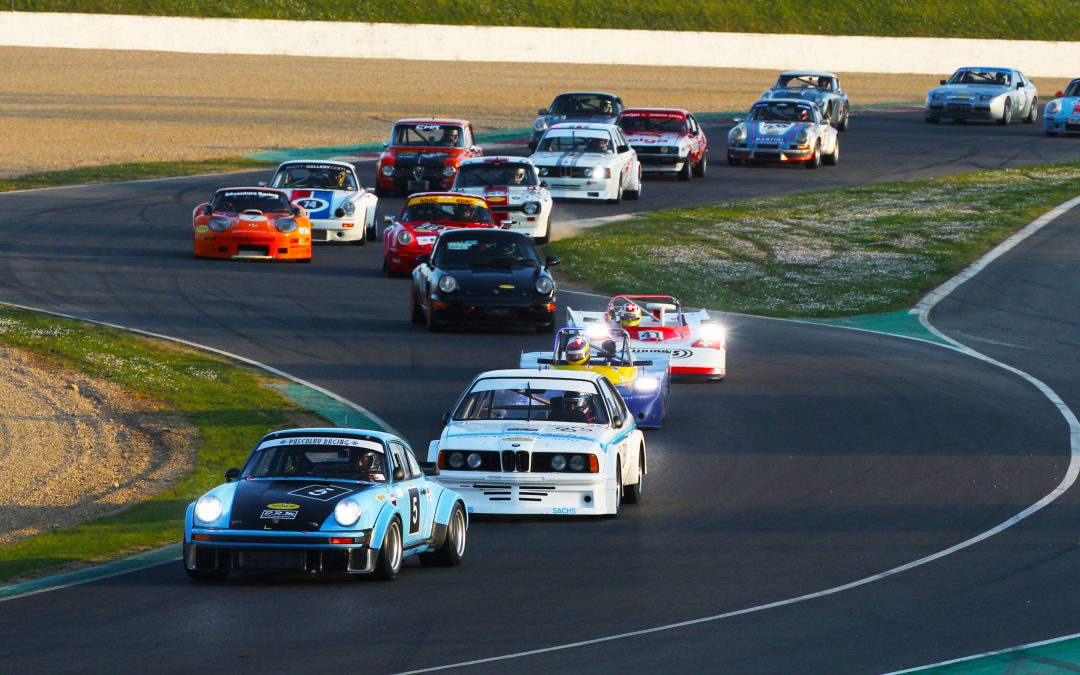 At the end of a suspense-filled race caused by nine changes of leadership, victory in the overall classification of the 6 Hours of Magny-Cours went to the Porsche 930 Turbo entered by Pascalou Racing and driven by Sébastien Crubile-Pascal Duhamel. The start was given at 18:13 on the dot on Saturday 26th March. The Porsche 930 Turbo entered by Pascalou Racing, which had set pole position the previous day, shot to the head of the field (photo above), but the two prototypes run by the Equipe Palmyr quickly went on the attack and took up the running. The March 81 S in the hands of “Nelson”-François Belle-Augustin Sanjuan was in front until lap 3 before giving way to the Tiga SC 79 of Marc Faggionato-Christian Vaglio-Giors-Gislain Genecand (photo below centre) that held on to first place for most of the race (114 out of the 161 laps). Unfortunately, shortly before 23:00, the Tiga SC 79 was signaled limping along the track with smoke billowing from its bodywork. It made it back to the pit lane and stopped at its garage where the Equipe Palmyr mechanics saw that a caliper on the rear brakes had broken. The Tiga SC 79 lost time for repairs and then rejoined the race in third place. But it was too far behind the new leader to close the gap so it ended in third place on the podium.

Earlier on in the evening, the Equipe Palmyr had already suffered its first setback. Its March 81 S that had been ensconced in second place since the early stages of the race suffered gearbox failure and retired at the end of lap 53. As the two prototypes were no longer victory contenders the battle for honours now raged between the Porsche 930 Turbo run by Pascalou Racing (Sébastien Crubile-Pascal Duhamel) and the BMW 635 CSI of the father-and-son team (Paul, Jean-Baptiste and Matthieu Chateaux)(photo below left). The Stuttgart GT finally emerged on top with a lap in hand over the saloon from Munich (winner of the touring car category).

There was a thrilling scrap for fourth place overall (also synonymous of victory in the Saloon Car category) between the BMW 323i driven by Eric Wassermann-Eric Baumard-Olivier Huez and the Porsche 944 S2 entered by the Cudini Racing Team in the hands of Arnold Noret-Franck Hardonniere-Bruno Vieren (photo above right). Both cars suffered fuel problems. The BMW 323i had a leak inside the cockpit and had to stop for repairs just before 20:00, while the Porsche 944 S2 had a very long stop at the official refueling station at 20:20 losing five minutes that were restored to it by race control at the finish. In the end, victory in the duel went to the Wassermann Racing BMW 323i.

The Porsche 964 RS entered by the Pelletier father-and-son crew and the Porsche 964 in the hands of Romain Duval-Patrick Bonnardel-François Riaux had flawless races and finished in sixth and seventh places in the overall classification respectively. Despite gearbox problems, the 911 3.2 run by the Cudini Racing Team for Christian Noret-Jacques Colibet-Philippe Vigneron came home in eighth place. After suffering overdrive and oil surge issues in qualifying, the Austin Healey 3000 MKII driven by Sébastien Berchon-José and Jérémy Da Rocha (photo bottom left) enjoyed a trouble-free race rewarded by ninth overall at the finish. (1st in the GTS 12 category). The Bertramelli father-and-son Ford Escort MK1 that retired an hour before the chequered flag completed the top 10 with 128 laps covered. And last but not least, the Porsche 3.0 RS of the Duigou Racing team’s Corsican driver lineup of Louis Antonini-Jean-Pierre Raffalli-Pierre Vivier-Muglioni rounded out the final classification despite an accident and an oil pan problem.

Among the retirements were: the Legendary Racing 911 3.0 RS in the colours of the famous American Brumos team entrusted to Franck Laga-Jean-Louis Meynart-Jérôme Cudennec (engine problems), the Daventure Racing Marcos Mantis crewed by Alexandre Jaboulet-Vercherre-Jean-Marc Bachelier-Laurent Collin (broken right-hand front half-shaft) and the March 81 S of “Nelson”-François Belle-Augustin Sanjuan (gearbox failure) already mentioned above. After this perfectly-run thrilling opening race unanimously praised by all the competitors, V de V Sports fixes a rendezvous with its teams, all passionate endurance enthusiasts, for the blue-riband event of the season: the 2 Tours d’Horloge (the only non-stop 24-hour race reserved for historic competition cars) which will be held on 4, 5, 6 November on the Paul Ricard circuit. This historic not-to-be-missed edition will celebrate the event’s 30th anniversary!